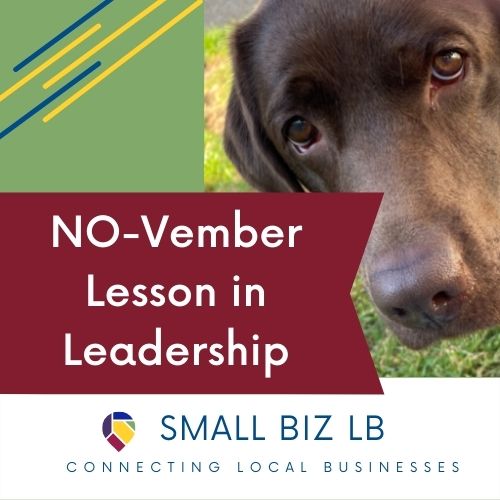 There are lots of lessons about being a leader I’ve learned from my dog – not something I ever expected to say!  This month two of them are top of my mind so I thought I would share them with you.

They both have to do with saying No and making room for something better.

When you first get a dog, they don’t know the rules of how to behave in your life and in your home, you have to teach them.  Inevitably they will do some things that you don’t want them to do and you will have to tell them no.  Now I’ve had years of experience of telling people no in the workplace, no you didn’t get that job, no that project isn’t going to happen, and even no you can’t behave like that here, so you would think I should find this easy – but no.

It took me a while to work out with my dog that No didn’t mean anything and that actually what worked best to change her behaviour was to give her something else to do, so rather than saying no when she got up to something she shouldn’t or I didn’t want her to, I would ask her to sit, or to fetch a toy etc.  It sounds really obvious, but instead of creating tension and a void in what she was doing, so creating more room for mischief, she learned what it is OK to do and did more of it.

The same certainly happens in other areas of our lives, both at work and at home.  Saying No can become a habit, but before you next say No or don’t do that to someone, how about giving them something positive to do instead?

The second No related leadership lesson my dog taught me has to do with letting go of things that don’t help you anymore.  My dog is certainly someone who loves routine and familiar things, and she is not happy when things change!  That said she has a great way of dealing with it.  When a change is imposed on her she will run in circles like a crazy thing, zooming here there and everywhere for a few minutes.  Then she stops and whatever it was, is forgotten.  Now I’m not suggesting this is an appropriate way for us all to deal with change but finding a way to physically let go of the past is, and if you for that means running in small circles I’m not going to judge you, but in a meeting people might!

Despite her love of routine and the familiar, my dog also uses this change mechanism to let go of things that don’t serve her anymore – that toy that she used to love, once removed is forgotten forever and replaced with one that she enjoys even more.

As we start to think about what we want next year, now is a good time to review the things that don’t serve us anymore, to say no to them, get ready to let them go and to make toom so you can replace them with something that works better for you.

If you want help saying No this November (or any other time) or you know something in your business needs to change but you don’t know what, let me know and let’s chat.